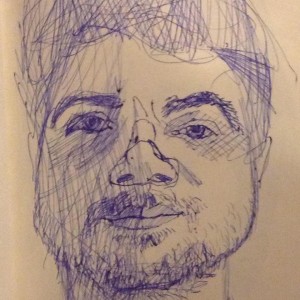 Born to high school teachers Zia and Umme-Nabi in the throes of 1979 Revolution in Rasht, Mohammad Tolouei tried different paths of arts and crafts in prime before he made up his mind in the 1990s to pursue a literary career, first as a tenacious poet and dramatist, and then as a storywriter.

Tolouei holds a BA in Cinema and an MA in Dramatic Literature from the University of Tehran. His debut but overdue novel Fair Wind’s Prey was published a decade later in 2007 (which brought him the Farda Awards for Best Technical Novel of the Year and was nominated for the 8th Shahid Ghanipour Awards); his first short story collection I’m Not Janette, released in 2011, was the finalist of the 12th edition of the notable Golshiri Literary Awards. In 2014, two more books of the prolific writer were successively released by Ofoq Publications: Lessons by Father, a collection of interdependent short stories themed on father-son relationship, and Real Madrid, a novel for young readers about a group of teen footballers in the South of Iran and their adventurous journey to Dubai in to play with Real Madrid’s teenage football team based in the UAE.

Tolouei belongs to the emerging New Generation of Iranian novelists and short story writers marked by their transitive style of writing that sets free of tradition and ventures novelty in narrative and form. An urban middle class voice with a good command of history and a peerless consciousness of space, Tolouei is often praised for his unique diction and lauded for dauntless treatment of far-off professions with peerless mastery over related jargons. His hyper-realistic fictional world is known for its diversity; he probes into the world of the invisible citizens and underground dwellers: the antiquarians, backgammon players, opera singers, communist partisans, elite addicts, and voluntary combatants. Tolouei has traversed a long way from his debut novel – an account of the inhabitants of Rasht in time of the Second World War and enforced emigration of Polish refugees through Iran, and the formation of the Communist Party– to his later stories with cunning use of mockumentary as dominant narrative technique. He calls himself a disciple of Borges and Llosa, while he is sometimes compared in his bold style with the younger Martin Amis. A number of his stories are translated to English, French and Italian and published in Iranian and international magazines such as the Italian Internazionale, The Guardian and Asymptote Journal.